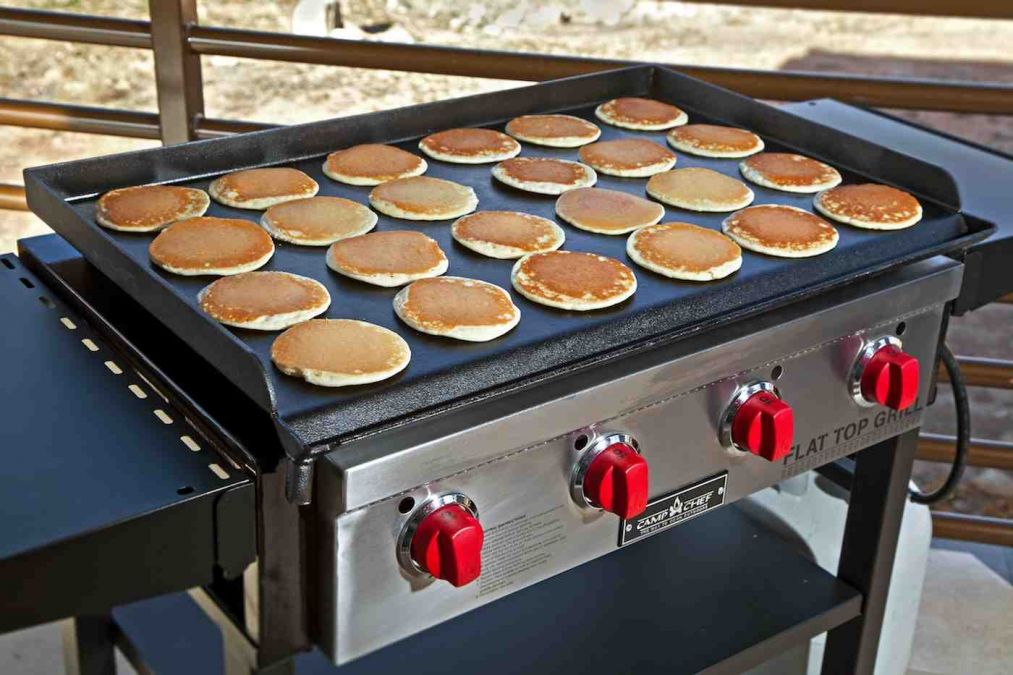 Grilling a piece of meat and enjoying the aura that rises out of it. Combined with its taste that reflects in every layer of the meat is what one wishes to have on the weekends. There are different methods of grilling the meat. One can grill the meat either using a outdoor griddle or grill. This method teaches you how to grill the meat on a flat griddle.

What do you need?

These are some of the things you need.

How to make this delightful delicacy?

The procedure to make this recipe is given step by step.

Set up your griddle:

If your griddle is within the interiors of the building, then make sure that you do not set the temperature so high that you start feeling the heat. The high temperatures only burn up the meat faster than they actually cook the meat. Grilling is a process that needs a slow buildup of temperature. The slowly cooked meat tastes better especially in the case of grilling.

It is always better to set up your griddle outside your home, in the lawns so that you also don’t feel suffocated plus the cleaning process also becomes way easier. You need not have to face complaints from the neighbors that they are unable to bear the smell of the smoke.

Before you start heating the grill, make sure that the grill cleaned properly. It is a good way to keep yourself healthy from all the microorganisms that reside in the grill.

Heat well and place the steaks

Once it is heated to the right temperature, spray some generous amount of oil on the pan so that the steak does not stick to the pan.

The steaks are then placed on the griddle and ample space is provided between the steaks. Thus, the meat gets cooked right. One can spray some butter after turning the meat on the other side. And sprinkle some pepper and salt over the meat. Once you see that the meat has shrunk in size, you can remove the meat from the griddle and place it aside. Make few cuts in the steak to get more flavor of the meat.

The best part about grilling is that you do need to add sauces or any other ground powders for flavor. If you boil meat, then you need to add some seasoning and other ingredients like chili flakes in order to make the recipe taste good. But, for a grilled meat, the pink color which is the sign of a well-grilled meat is more than enough to make one come back again for the feast.

Time to grill some veggies for the sides!

Take few potatoes and slice them after washing them nicely. It can be peeled or unpeeled. Parboil the potatoes and drain off the water completely. Let the potatoes be free of any moisture. Keep the potatoes on the griddle after you turn the meat upside down and spray some oil and butter on it.

Take all of the chopped veggies. Spray with some oil and toss the veggies continuously. The veggies should not be too soft. It must be crunchy so that it goes well with the soft meat.

Serve this on a huge plate. This is the best style of serving a grilled meat. You can have any dip as a side if you wish to. A tiny bowl of mayo would never do any harm.

The grilled steak if leftover can be chopped into very tiny slices or can be a pound. This pound meat can be used for burgers and sandwiches.

What is the difference between cooking a meat using a griddle and a grill?

The grills are those which are the tube metal-like structures that are held together tightly at both the ends. One can cook the meat by using the grills that are fired with the help of charcoal or any firing materials like wood. The smoke of the charcoal

What is the best part about cooking meat on a griddle?

If you cook meat on a grill, it is very difficult for you to cook the veggies side by side. One cannot actually hold the veggies together properly on a grill. It keeps falling often. If you cook the meat on a griddle, you can infuse the flavor of the meat that is left over in the griddle on to the meat. The veggies thus also get a flavor of the meat. You do not need to use more than one pan in order to make an entire grill platter. Once the meat is cooked you can keep it aside and add the other vegetables to the griddle and fry it for the sides of the meat.

Thus, by following this recipe step by step you can make some of the best-grilled meat at home itself without having to spend too much of bucks in the restaurants.